The Champ Is Here…

So I get EA UFC 3, throw it into my console, 2Gb update… yeah sure crack on. It’s TIME!!!!!……. freeze screen….crashed. Second time lucky lets go mother fuckers!!!! Loads up, picture of Conor MacGregor… Press Any Button to continue.. Let’s get some fighting done… What…wait a user agreement… This game cost me £52.99, there’s next to no effort gone into the box art, and nothing saying I need to sign a contract to play the fucking game I’ve just purchased. 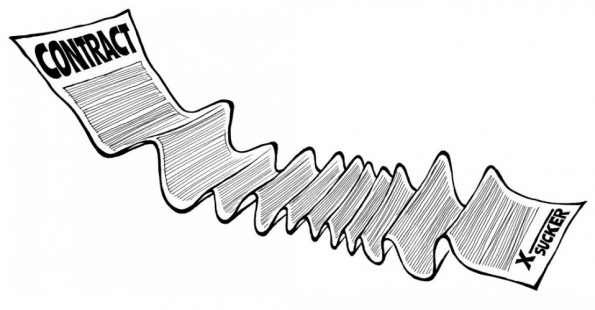 I know plenty of games have this, but isn’t it time it goes. I scroll down the very very lengthy user agreement. I have recently filled court people work in my personal life, the amount of paperwork I filled to sue, was considerably less than the user agreement. That’s fucking outrageous, I have to pay for the game, from a retailer, whom if I take the game back and same the reason I don’t want it is because I have to sign a contact in order to play the game, the store will most likely argue the toss even though it’s my consumer right. Disgusting!

Fuck it, lets play it…

And It’s All Over…

Just like the previous UFC games from EA they have their hands tied as far as aesthetics are concerned. The Reebok deal is still hurting the brand for me, so we have the dull white tiles of the last game only some how less engaging this time around. More tiles than last time implying much more to do…we’ll get to that.

With the only real splash of colour and interest coming from EA advertising their paid for loot boxes for the online ultimate team mode… so I signed a User agreement and paid £52.99 to have you advertise to me? Thank you, I feel like a valued customer.

So game modes lets list them: The words in red are there actual names

Plenty to do right? wrong! Let’s have a quick look see at each one

Maybe It’s Time To Retire After Such A Beating

Straight away congratulations on adding a tournament mode, a mode that should have been in the very first game, so waiting 6 years for it was fine. Thank you EA… Anyone remember UFC: Undisputed 3? I do, it was bloody good fun, that had a great tournament mode, in fact it was very highly praised for it. UFC: Undisputed 3 was the last game THQ made before EA got the UFC brand.

EA borrowed much from the mechanics from Undisputed whilst adding, their EA UFC submission thing. You’d think they would have taken the aspects of the aspects of the THQ titles that the fans loved and had them straight away… this is EA we are talking about, they like to parse everything out, and slowly drip feed these features in each iteration under the guise of “new features”. 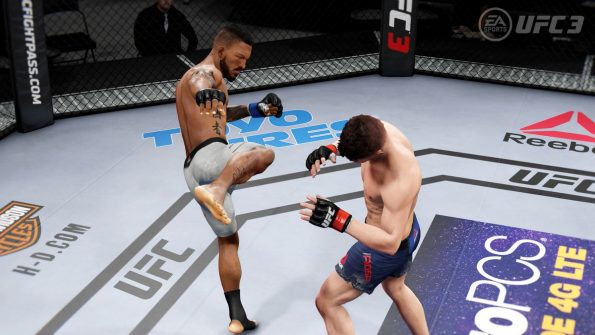 Here we are 3 games and 6 years into EA owning the brand, and the biggest and best addition is a tournament mode… just a standard tournament, you can’t choose to fight Pride Rules, you can’t choose a different cage. But at least it’s here, and that’s something. One slight little extra with the tournament mode is the loose weight category. Just means that you can fight opponents who aren’t in your weight class normally, bit like the old Pride style weight classes.

Stand and Bang and Knockout Mode just seems to similar it’s stupid. Knockout returns from the previous games, get hit enough you get knocked out. Stand and Bang is the standard game but with takedowns switched off, and shite commentary from Snoop Doggy Dogg… Yes Snoop Dogg, Joe Rogan didn’t want to come back to record more stuff. To be fair I don’t blame him.

Submission Showdown is just submissions to win, bit dull and frustrating to be honest.

What An Embarrassing Loss

The creator character has returned, with no noticeable difference, meaning shit. It’s terrible really is, you can spend hours if you like shaping the face of whomever you want create, only to be let down by a piss poor choice of hair cuts, and pathetic beards, which make your character look like he’s whacked glue on his chin or lip then face planted a barbers floor. 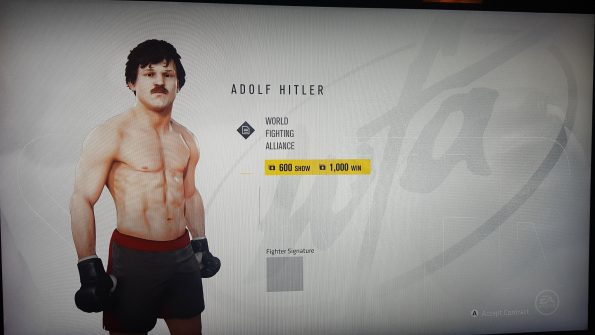 Gameface makes a triumphant fart of a return. I’ve attempted on multiple occasions to create a decent Gameface character, but besides a golf game many years ago, it always fails… Such promise wasted with half assed effort… Seems to be par for the coarse over at the EA headquarters.

Let’s have a quick chat about the career mode. Is it better than UFC 2? Yeah-ish. This year you start in the minor leagues instead of The Ultimate Fighter. WFA is you’re home, after you’ve won a couple of fights it’s off the UFC. I would have preferred fighting in the WFA, then moving into the TUF house, onto the UFC and making a move for the title but no. It’s all rather rapid.

Gone are the training mini games of old, instead opting for a known amount of stat increase, with the potential to injure yourself, and receiving a de-buff for the next fight. The an extra addition they’ve put into the career mode is social media, you have to hype your fight. Each week of training you have 100 points to spend on either training, learning new moves or social media (mainly twitter). Once you are in the UFC you have contract obligations like turning up for television interviews or other press junkets. You don’t actually do these, the trailer would have you believe you go to weigh ins and the like but nope. 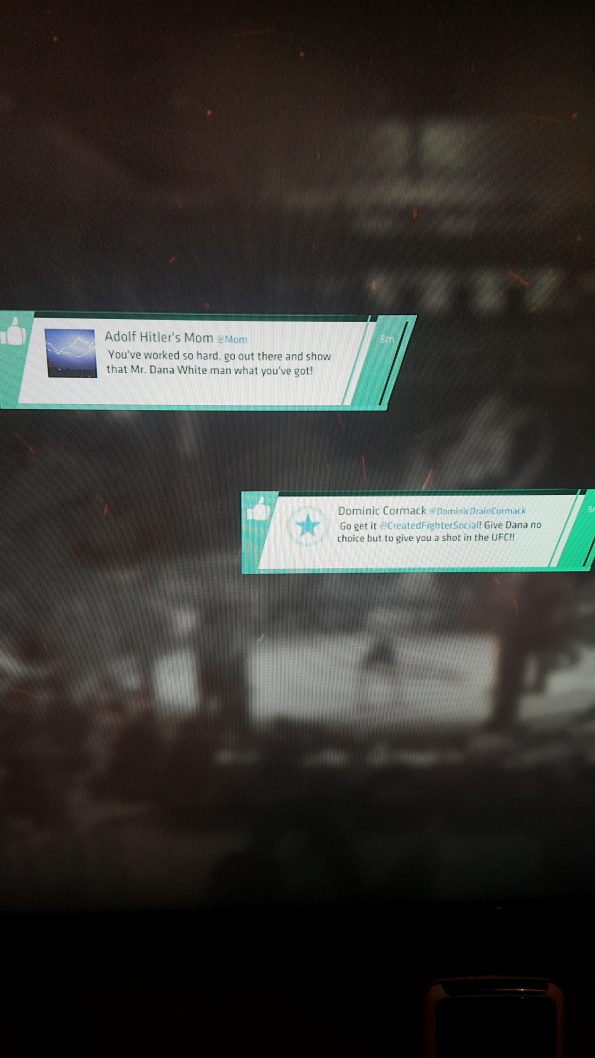 These obligations often cost a lot of your points like 70 or 40. Sometimes, you’re required to do two of them in one week. One will be 70, the other 40, failure to to attend these things will result in you taking a cut in pay for the fight. Now i’m sure you can see that 70 + 40= 110 points, so it’s impossible. It’s things like this that just go to show the lack of play testing.

Dotted through your UFC 3 career the occasional cut scene will play, I witnessed maybe 6, during my 33 fight career, they pretty much dry up once you are the champion. Meaning being a champion doesn’t feel special, you’re best off winning the belt then calling it a day. The only real other thing you can do when you are a champion, they offer you a weight change to fight the champion of that weight class. Two belts woot!

Ultimately, it’s an average Career mode, nothing special, but EA MMA had a more engaging Career…nearly 10 years ago…

Pay Per View, Pay Per Play, Pay To Win…

On to UFC 3’s Ultimate Team Mode… You are give a fighter and set of moves in the form of cards, the fighters are on a set number of fight deal, the are a random level, and so are you’re moves. You fight against other peoples Ultimate Team members, increasing your ranks and earning pseudo money by completing challenges. 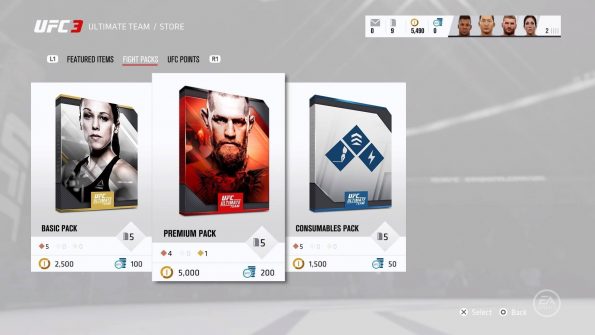 Are you getting your ass handed to you over and over again? Give EA money and they will give you more cards consisting of Fighters, moves, and stat boosts… Please fuck off. The problem here is it feel like a money phone game shoe horned into this £52.99 game, not only a mobile phone game, but one that is based around you spending money to get better.

EA have had a hell of a lot of kick over the past 12 months as far as loot boxes and micro-transactions, I know it’s kinda part of the sports model they have, but it’s still not kosher as far as I’m concerned. With so much effort placed around the Ultimate Team mode in UFC 3, it means there’s a large chunk of the game I don’t care for. Another miss.

The game looks pretty, moves well (when it’s not staggering), there are a good amount of fighters across two female classes and all the male classes. Some legends are thrown in there to mix it up, but still now Oleg Taktarov, Marco Ruas, Don Frye, Dan Severn or even Bas Rutten. I understand that’s just me wanting them, but most of them have been in the UFC: Disputed games.

Bruce Lee makes a return, apparently the father of mixed martial arts… I beg to differ. But at least Mike Tyson isn’t here this time round.

On the whole I think this is a lesser game than UFC 2. There’s “more” to do this time round, but more nothing is still nothing. 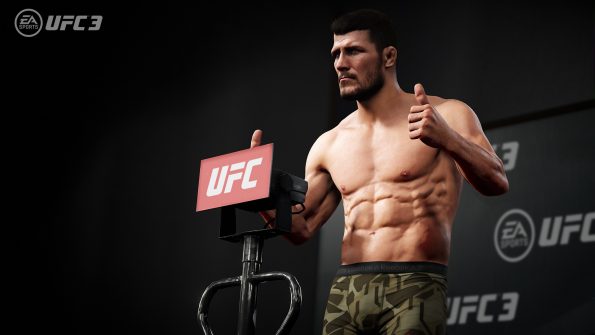 The tournament mode is the only plus point the game has over the previous title. Instead of buying this game, I highly recommend you purchase UFC 2 from a indie game store, you can pick it up for next to nothing nowadays. It’ll keep you entertained if you have folks around,. Just grab a pad and pencil and draw up you’re own tournaments.

There isn’t enough here to warrant the price tag, I’m sure the developers are limited both by EA head sheds and WME as to what they can add to the game. Due to UFC wanting to emit it’s public image as a sport like football, Basketball and Baseball. But by doing so the UFC product looses some if not all of it’s character.

I feel these games would be better given to another developer and WME give them a little more free reign.

I do not recommend EA Sports UFC 3, even if you are a fan of MMA. Get the second one instead. 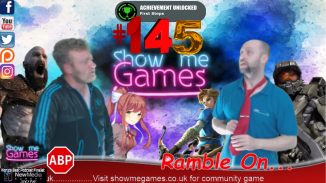