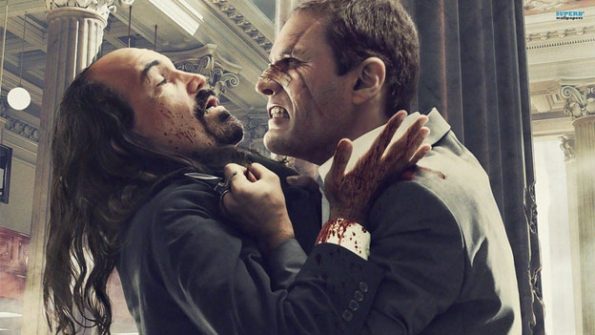 My mind did wander back to Absolution though. For all it’s lack of proper Hitman game play, there was a lot of fun to take away from it. A couple of my favourite moments, are the bar scene where you meet Kane, and the gun range where we see Lynch. It saddens me to think that I’m not going to get a Kane and Lynch 3. Both characters are so interesting to play. So because of my reminiscing, I figured that I could write a love letter to those bad bastards.

The first game came out under a lot of criticism, not just because of the game, but because Eidos had a reviewer Gertsman, fired from his job due to a  low score review. Lots of outlets at the time were scoring the game with 9’s, after the Gertsman firing, and the fire that spread on the internet, Kane and Lynch then became a whipping boy, then getting scores of 2’s,3’s, and 4’s. Which gave the general public a very confusing view of the game.

Sat in the back of a prisoner transport truck, trying write a letter to your daughter, and angry Bill Bailey screams DUCK!!! (or words to that effect), the vehicle flips over, doors burst open, and you’re in a firefight. Cops, mercs and inmates, in the middle of a suburban street, broad daylight…nice!

Lynch (Player two) is armed, Kane (Player one) is not. A quick run around the corner, and Kane get’s his nose smashed in with the butt of a gun, and told that THE7 want a word with him.

The next 15-20mins are taken up with firefighting your way through this unsuspecting little town, battling through a car body shop, into a warehouse house, sneaking in to the back of a diner and holding up there for a shoot out with the cops, before finally being told to make a break across the parking lot, into a smaller cafe whilst you await pick up.

The opening level of Kane and Lynch is still one of my favourites today. It’ll take you a little while to get used to the controls, due to the awkward cover mechanic (which once you understand it, works so much better than 90% of the reviews tell you), and the fact the aiming reticle isn’t exactly where your bullets are going to land. It’s an approximation, and i like that, this game is intense and the likelihood of you one shotting everyone you see, in the middle of a firefight isn’t realistic. I get it’s a game, so realism takes aback seat, but i truly believe it was a conscious decision on IO’s part to have you fire like that.

Second level, then give you a little breather really, giving you a barebones plot. Kane has something he stole from THE7, he needs to get it back or his wife and kid are going to be killed. Lynch will be going with him, as a minder of sorts. Making sure Kane sticks to the job at hand.

What follows from this point is a set of movie style shoot outs, you take on a bank heist, complete with the getaway. Break out your old mercenary brothers from a max security prison. Smash through the windows of a Japanese high rise to kill a mob boss, then have a “Heat” style shootout across the city streets to your getaway vehicle. Walk into a nightclub, kidnap someone then shoot your way out, set up a meet to trade the hostage at a pagoda whilst Lynch acts as sniper cover. Overthrowing a South American government, stealthing in the jungle, and trying to save your daughter. 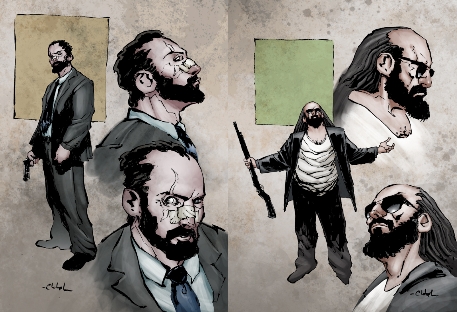 It’s not so much the levels that make me love the game, it’s the two antagonists, the titular title characters. If you took out these two interesting guys and replaced them with someone from any other game franchise, the exciting levels wouldn’t be as fun. Kane and Lynch is a dark dark comedy.

Kane is a man that has done wrong, has no problem with doing wrong, and who has accepted that he is a bad guy that probably deserves to die. His main motivation, is the task of letting his wife and kid know that he loves them very much, and hates himself for the hurt he has caused them. The game does start with him on a death row prisoner transport, he’s done and conceded to his fate. The fate that will make the world a better place because he’s not around to harm others anymore, especially his family. Quite an unusual backstory I’m sure you’ll agree.

Lynch on the other hand, is a chemically stabilized individual who’s motivations are slanted. Tortured by the possibility he killed his own wife, but can’t remember it, occasionally having flash backs and paranoid delusional schizophrenic hallucinations (Which IO have done so well). Lynch is a bumbling idiot, which manifests itself in his rage. He is the comic foil to Kane’s precise deadpan. If something is going to go wrong it’s probably going to be Lynch’s fault, he’ll snap because of something someone’s said, or he’ll just be having an episode. But under it all, is a sort of moral guy. Who hates to see Kane loose his family. Deciding to help, if only for a small bit of redemption on his soul. Not a good person in by any means, but not completely without conscience.

In Kane and Lynch I can see, many a parallel with Dante’s Divine comedy: Inferno. Kane being being Dante and Lynch being his spirit guide Virgil. The entire story is a hell of Kane’s own creation, and with Lynch, Kane travel through his past mistakes trying to justify them to the oblivious Lynch. Each one of them sins, Greed with the stuff he stole, Lust with the mob bosses daughter, Envy of the power THE7 had, and so on. It’s just a little thought I had.

In The Mind of a Killer

Ok, lets deal in brief with the wonderful way IO made this co-op shooter different besides playing as two seriously dangerous men. Its the well touted hallucinations. They set the scene perfectly. When Lynch first gets his visions, it’s very very well done. During a bank job, Kane and a vault breaker are down in the vault, to get the stuff for THE7. Meanwhile Lynch is in the lobby, on crowd control. All is going well, Kane holding off waves of police, whilst cracking the vault open, and then Lynch starts screaming. Both players are kept glued to their own part of the screen.

Now, as player one, you have a quick glance at player two’s screen and notice a lot of police are running around. As player two you panic, there wasn’t that many police a second ago, and start shooting up the place. Little do you know you’re actually shooting at hostages, your warped mind and paranoia has made you think that everyone is out to get you, and so see everyone as cops. Going crazy and shooting most of the hostages after a min or so you come to your senses and innocents are laid about you. Oh fuck! Kane being down in the basement is oblivious to whats happened, Lynch is freaking out and apologizing, but now the real swat have arrived. Kane finally makes it up to lobby, and sees bodies everywhere, innocents just slaughtered. As player one, you think player two was just being a dick. It’s great!.

The effect is used sparingly, which is perfect because you never know when it’s going to happen (at least on your first play through). One thing i did notice, that on the Japanese street level, when Lynch loses it again, it’s only the women that change into cops. Furthering his woman issues.

If Kane and Lynch 1 was following how Kane needs Lynch. Kane and Lynch 2, proves Lynch needs Kane. The second game was brilliant, again being bashed and smashed in the review scores, understandably. It’s going to sound very strange but Kane and Lynch: Dead Men is one of my favourite games ever and I’d still review 7/10, if i had to recommend it to people.

In Kane and Lynch: Dog Days, Lynch is the player one character. Generally fucking things up, which Kane has to fix. The controls were tightened up in the third, and the aestetic slightly changed. The game would pixelate the head shot damage, dicks, and tits. It was promoted like a found footage, or a CCTV camera styling. It’s pretty nice to look at actually, and fits the rough, chaotic feel of the game. 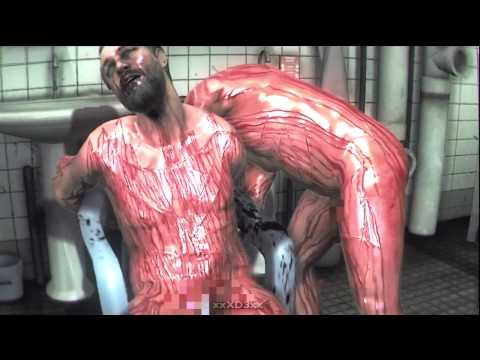 The setting this time round is Hong Kong, it’s beautiful and miserable, in just the right proportions. There’s a pretty brutal torture scene, which is followed up by a naked shoot out through a shopping mall. It’s great

Although, I’m not talking in great deal about this game, it doesn’t mean that I don’t like it, the feel is right, the dark slapstick is right, the sick individuals are right. I love spending time with these horrible people. You can’t have one without the other, they are two sides of the same scratched up and dented coin. The finale of this game, ends with Kane and Lynch boarding a plane.

I love the idea of having another one of these games, but in 2013 the 3rd game was cancelled by Eidos. Hopefully with the success of the two new Hitman games, IO Interactive will be left alone, and given free reign for a game. And hopefully that game is Kane and Lynch 3.

A thought I had for the start of the game is that they have been arrested, they have been separated. So you play the game co-op, but in different prisons, both breaking out and finding a way back to each other, over the next two levels. It would be a way of showing even more, how much they actually need each other. Conflict: Desert Storm did that sort of thing well, years ago on the Xbox Prime.

Hell you could even kill them off at the end, but please IO, don’t leave us with the end of Kane and Lynch as the end of the franchise.

If you’ve read this far,I do thank you, and also apologise for the writing style. Practise makes average 😀 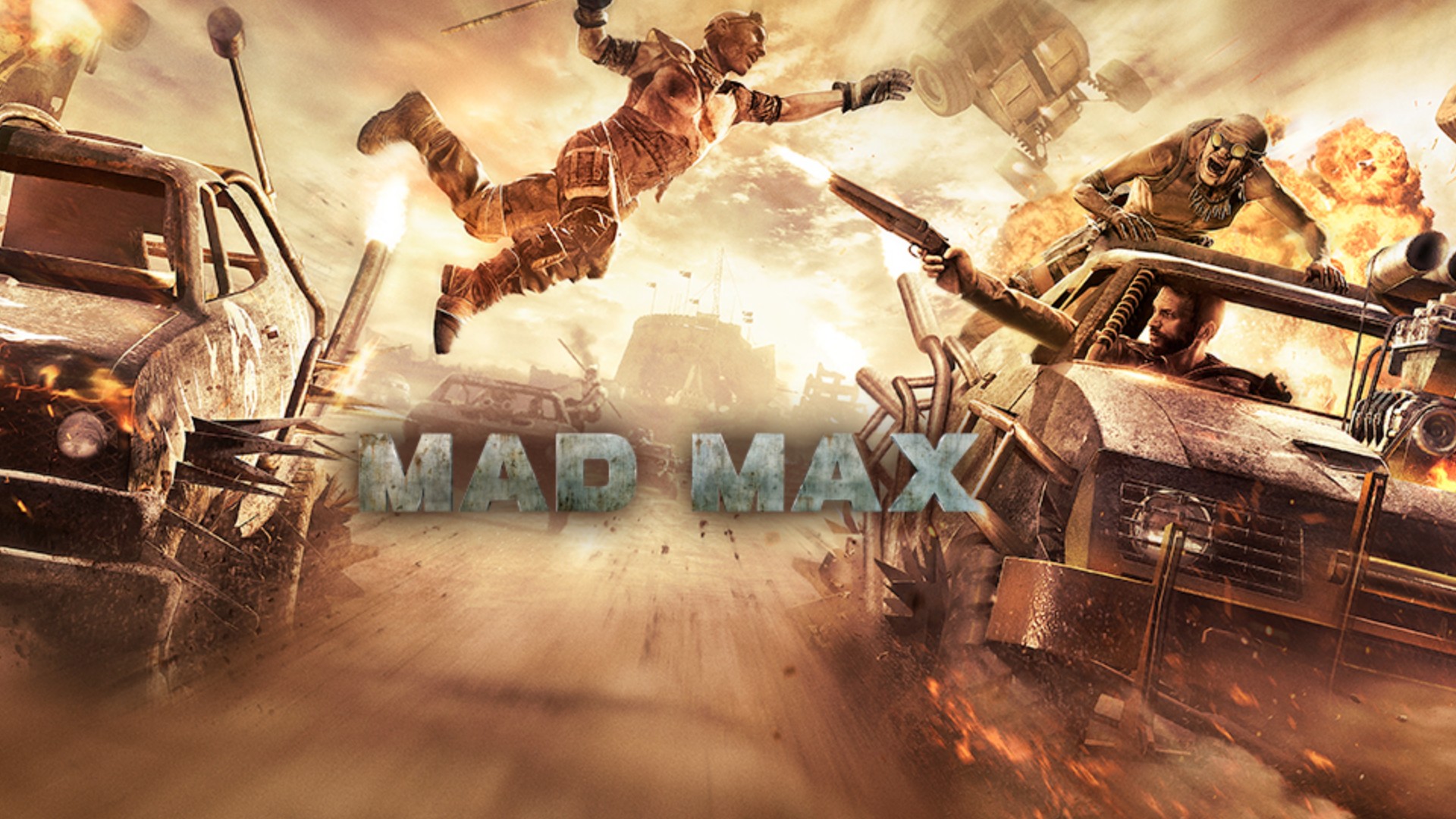